Trees from five continents, oriental gardens, African art and secrets from the centre of the Earth. All of this can be found in the Monte Palace Madeira tropical garden. 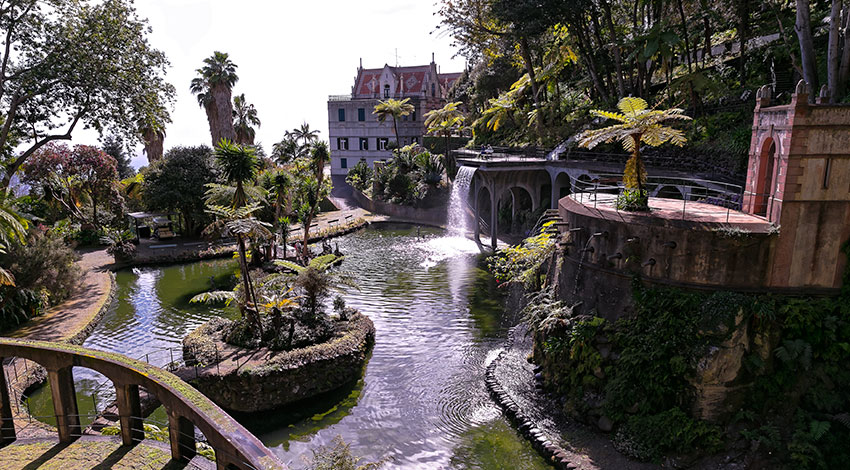 With the break of Dawn shining through thick trees, Monte is still a quiet place. The stillness of the most romantic parish in Funchal is only disturbed by the sound of the water from Largo da Fonte, the chatting of those who earn their living from riding wicker sleds and the bell of the church, one of the most iconic for believers in Madeira.

A visit to the religious temple is almost mandatory, were it not the resting place for the last Austrian emperor, Karl I. The monarch passed in 1922 and spent the last months of this life exiled in Madeira, after the First World War.

Even though it is a place of worship, Monte is also a place of gardens. And many sport a privileged view of the city. This is the result of the investment made early on during the constructions of many quintas, traditional Madeiran manor estates with gardens. And it is also a consequence of Monte being a tourist resort since the 19th century.

The cable cart connecting Monte to the centre of Funchal is the most contemporary means of getting here. Next to the station is the entrance to one of this area's most interesting locales: Monte Palace Madeira.

It only takes about two and half hours and adequate footwear to explore the island's most famous tropical garden, covering an extension of around 70,000 m2.

South-African sago palms, Himalayan orchids, American sequoias, Belgian azaleas and thousand-year-old olive trees from Alqueva, in Portugal. At Monte Palace Madeira, the notion of 'travel' underlies every inch, waterfall or flower. But one can also breathe Madeira here. In the east area of the garden, there is a place meant exclusively for species endemic to the Laurel Forest. There is the Madeira laurel, the tilde, the vinhatico and the barbusano. Then there is beech, mountain mocano, and the lily of the valley tree. And others still. Na entire forest confined to a special place in the tropical garden.

There is a whole trip through nature to be had. And one through history as well. Taking it from the north of the Garden, 40 panels tell the story of Portugal, from the conquest of Lisbon by D. Afonso Henriques through the definitive settlement of the Algarve in the era of Afonso III and the reformations led by D. José I right down to the founding of the Portuguese Republic in 1910.

Two permanent exhibitions tell us other stories. One from Zimbabwe depicts the evolution of the first artistic generation from the Tengenenge region. Sculptures made from serpentinite recreate faces, animals and abstract shapes. The 'Mother Nature's Secrets' exhibition showcases 1,000 mineral samples from places as widespread as Brazil, Zambia or North America. The samples are in display in cavities attempting to simulate the environment where minerals are formed in.

Thankfully for the more romantics, not all of the Monte Palace Madeira's secrets are well kept. The Romeo and Juliet balcony is a mandatory stop for couples. Before the lens of the camera, lovers have fun imitating the poses of our culture's most famous romantic characters. 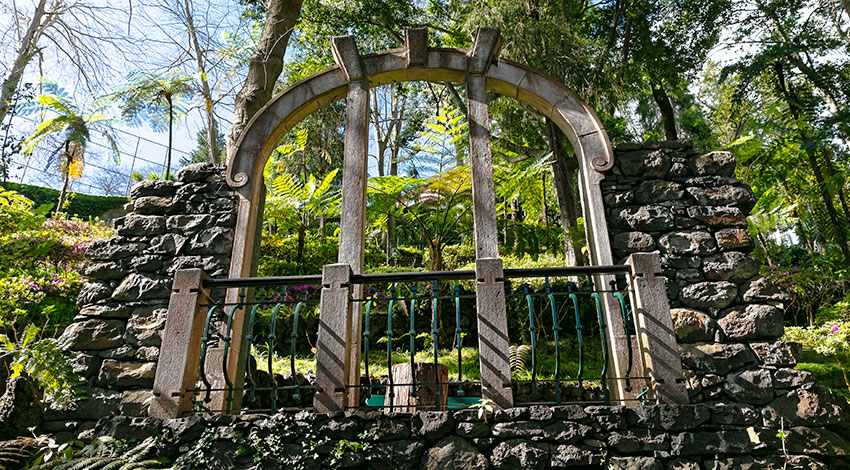 But the garden is not the property of just the romantics; it also caters to the superstitious. Throughout the course, Lina Macedo, one of the guides, explains that touching one of the buddhas by the entrance to the oriental garden brings luck. There is also the fertility dragon, the wishing well and a dragon with a sphere in its mouth in the southern oriental garden. Those who spin the sphere can also expect good luck. Because it is better to be safe than sorry, one can always touch just one of these charms to be on the safe side.

If lady luck sides with the reader, you will make your way to the central lake and palace zone with good weather (and in Madeira, good weather is not hard to come by). If you still use role cameras, this is the place to spend them. The lake, with its enticing waterfall, and the view of the palace's façade belong in a fairytale.

Walking to the rhythm of the swaying tree branches, it is easy to leave the island and then return. In fact, that was the goal of the garden. One of the ideas of José Berardo, who promoted the space, was to give those who have never left the island the opportunity to become acquainted with other parts of the world. The estate actually takes its inspiration from the Madeiran businessman's travels. One said travel, to the Asian continent, is easily discernible throughout the path. The two oriental gardens transport visitors to a faraway location, between the famous terracotta army, the restless koi fish, the vivid red bridges and the imperial symbols.

After a true journey round the world, a visit to the tropical garden ends with a Madeira wine tasting in the terrace located at one end of the park. This is to place to let the view of the Madeiran capital restore your strength.

The story of the Monte Palace Madeira dates back to the 18th century, when the British Consul Charles Murray, Charles Murray acquired the estate located south of the church. In 1897, Alfredo Guilherme Rodrigues, a Madeiran businessman, acquired the estate and ordered the construction of a manor house inspired in the architecture he had seen in the Reno region when he went to the 1900 Paris Exposition. A luxury hotel by the name of Monte Palace was thus born.

After the death of Alfredo Guilherme Rodriques in 1942, the estate was derelict until it was purchased in 1987 by José Berardo, nowadays being owned by the Madeiran businessman's Foundation. Four years later, the garden opened its doors to world and became a reference. In 2013, the Monte Palace tropical garden made the 14 'Most Beautiful Botanical Gardens of the World' ranking by Condé Nast Traveler.