Over 175 years old, Patek Philippe Remains an admirable success story and a true field of dream for collectors and admirers. 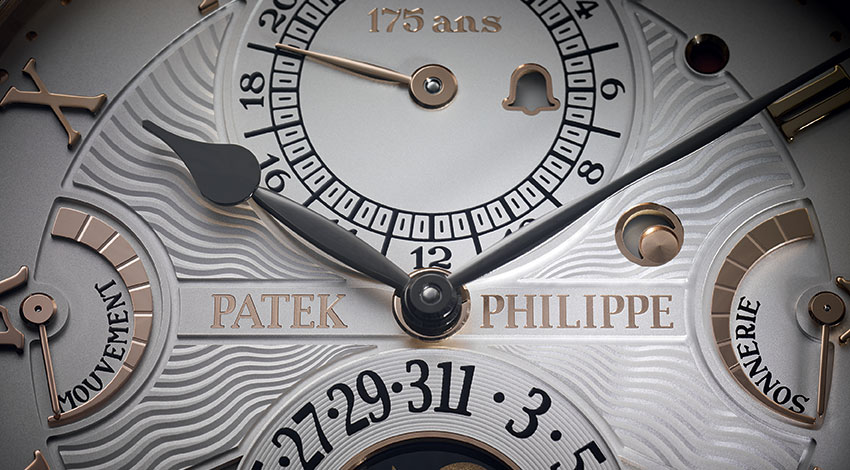 For those who don't know its story well, Patek Philippe is a bit of a mystery, especially if they don't know the defining moments that gave the brand the status it enjoys today amongst collectors and lovers of high watch making. One could even add some investors to this list who, more than ever, decide to place fine watches alongside art in their investment portfolios. Just flick through the catalogues of the likes of Christie's, Sotheby's and Antiquorum from the last 10 years to see how the prices have evolved and you will see what we're talking about.

But back to the essential – the extraordinary watches that the Geneva watchmaker has been building for precisely 175 years, as well as the collectors that gave body and expression to the status that the Maison now enjoys internationally. Summing up almost two centuries of history in so few pages would be an impossible task, so we decided to navigate through the high points of the brand's story, in which the watch and the collector were often inseparable.

It's undeniable that today, Patek Philippe seduces many of its followers for being one of the few manufacturers, if not the only manufacturer, to have an uninterrupted history since its foundation in 1839. Adding to this is the fact that, over this period, it has stayed in private hands and, consequently, has transformed that stability into a philosophy of continued quality and perfection that's hard to replicate. Built not long after the company was founded, and despite being completely renovated in 2006, the historical building on Rue du Rhône in Geneva is still there, as is the Patek Philippe name inscribed on the façade.

The foundation that sets the manufacturer apart from many others is essentially tied to the company's core values, such as organisation, and which have always merged with the character of the owners themselves: the Pateks, Philippes and Sterns.

Contrary to many other manufacturers, the high quality that's intrinsic in the watches built by Patek Philippe is a characteristic that emerged with its foundation, incorporating the highest standard of high watch making from day one, through a succession of complicated models with minute repeater. It's an attribute that hasn't changed over 175 years and which consequently had to be part of the spirit of its founders, its descendants and the Stern family itself, which, in 1932, acquired the company after many years as its dial supplier.

That passion for perfection, precision and history is translated in an unprecedented way at the Patek Philippe museum in Geneva, where it showcases the biggest private watch collections in the world, acquired over a decade by Charles and mainly Philippe Stern, the grandfather and father of the current president, Thierry Stern, respectively.

It's a passion that's also present in the way in which each Patek Philippe watch is conceived and created, and which justifies the extensive list of regents, heads of state, clerical dignitaries, industry magnates and proponents of art and culture who, since the 19th century, have been choosing the watch brand for themselves or to present to others. Antoni Norbert Patek, the Polish noble who founded the Maison and who would later join forces with the French watchmaker and inventor Jean Adrien Philippe, certainly had a clear idea of who his customers would be.

One of the best-known examples is in London where, during the Great Exhibition at Crystal Palace in 1851, Queen Victoria purchased a pocket watch quarter repeater with chronometer escapement to give to Prince Albert. The purchase didn't go unnoticed and generated huge recognition for the watchm aker. Some years later, it was Pope Pius XII who acquired a quarter repeater on two gongs, which he got engraved with “Pater, Rex/Dirigas Intelligentias/et/corda/Geneva 29 Junii 1867”. Then there's the example of the brand's first wristwatch, which was sold to the eccentric Hungarian countess Koscowicz in 1876, and a series of other personalities that was possibly outshone only by Breguet at that time.

But the most fascinating adventure is unequivocally tied in with the Grand Complications that Patek Philippe began producing even before the end of the 19th century, favoured by the industrial elite that was dawning in North America. The construction of the first known model of its kind was concluded in 1898 and involved Stephen S. Palmer, a well-known American industrial to whom the Grand Complication No. 97912 was delivered in 1900.

The pocket watch with seven complications could well have been the start of an ongoing gentleman's dispute for the title of most complicated watch in the world. One of those gentlemen was James Ward Packard, an inventor and pioneer in the motoring industry, who was fascinated by measuring time and particularly by the models with acoustic complications.

Just like Packard, the banker Henry Graves Jr. was fascinated by the complicated side of watch making, but initially gave special attention to precision, by almost obsessively preferring watches with certifications emitted by astronomical observatories. The winning models of the observatories' precision competitions were the objects of an endless chase until finally they were in his possession.

And while Packard must have commissioned around 40 pieces from Patek Philippe and Henry Graves Jr in the region of 80, it was a commission from the latter, a Super complication with no less than 24 complications in 1925, that put an end to the dispute; not only because they had reached the limit of what was possible at that time, without access to the modern means available today, but because five years before the delivery of the watch, Packard's death took away the element of rivalry that instigated the adventure. Graves received the Super complication on January 19, 1933, eight years after having commissioned it from Patek Philippe. It was the most complicated watch in the world, a title that would be forever contested by the Leroy 01, acquired in 1900 by the Portuguese collector António Carvalho Monteiro.

The dispute was resolved in 1989, the year when Patek Philippe celebrated its 150th anniversary and presented a commemorative collection for the first time. Of all the pieces presented for the occasion, the brand revealed the crown jewel: the extraordinary Calibre 89, which, with its 33 complications and 1278 components, dissipated all doubts once and for all over which was the most complicated portable watch in the world.

Twenty-five years later, in 2014, Patek Philippe celebrated its 175th anniversary and, once again, the brand decided to mark the milestone with a collection of limited edition pieces. Amongst the numerous pieces presented, which included the references 4675 and 5975, two stunning triple-scale chronographs with tachymeter, pulsimeter and telemeter, and the 5575 and 7175, which combine a world time indication and a large moon phase display at the centre of the dial, Patek Philippe also presented the reference 5275, a tonneau-shaped watch with a jumping digital hours display, a speciality that Patek Philippe stopped making in 1920 and for which it has now developed a brand new calibre, the 32-650 HGS PS, with 438 components and four patents.

These models, although defining, don't express the level of exclusivity and sophistication achieved with Henry Graves ' Super complication, the Calibre 89 or even the Star Calibre 2000, another ultra complicated pocket watch (with 21 complications) launched to commemorate the new millennium. The suspense generated before the presentation of the commemorative collection as to what would be the chosen pièce de résistance to crown the 175th anniversary was finally satiated with the unveiling of the reference 5175 Grandmaster Chime.

The surprise was immense, as few had anticipated that the Genevan manufacturer would opt for a wristwatch, or that it would develop a completely new complication for this model. With just seven pieces produced, the Grandmaster Chime is a Grand Complication wristwatch with no fewer than 1,366 components and 20 complications whose indications were distributed across two dials on the front and back of the watch.

The list of complications incorporated in the new calibre 300 in little over 3 cm3 of mechanism is admirable and includes, among others, grand sonnerie, petite sonnerie, minute repeater, alarm with time strike, power reserve for the watch and strike work, second time zone with day/night indication, instantaneous perpetual calendar, moon phases and, perhaps most surprising of all, a date repeater.

This last complication sounds the perpetual calendar on demand, with double chime for 10-day intervals and a high chime for single days. The new complication gives the Grandmaster Chime the title of the only watch in the world to incorporate three distinct gongs. What other marvels does Patek Philippe have in store for us to celebrate its 200th anniversary in 2039? Thierry Stern, the current president of the manufacturer, reveals only that plans are underway and that, until then, one thing is certain: Patek Philippe will continue to be a champion of the purest traditions in fine watch making and to keep making a growing number of true aficionados of this exceptional watchmaker dreaming, year after year.