As H. Stern celebrates its 70th anniversary, Vice-president Ronaldo Stern, who, wish his brother Roberto, incarnates the second generation of the global brand born in Rio de Janeiro, was in Lisbon to present the new collection and spoke with Essential Lisbon. 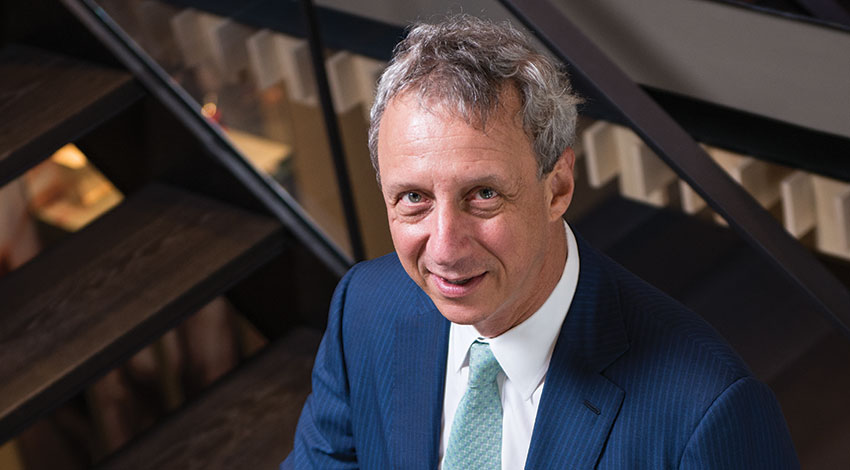 Founded by Hans Stern, a German Jew from Essen who fled to Brazil in the late 1930s, H. Stern is a true success story. It grew from a small gemstone business in Rio de Janeiro to become one of the most creative jewellery houses in the world today, all thanks to the vision of its founder.

In the belief that the stones he had found in Brazil, such as aquamarines, tourmalines, topaz and amethysts, had huge potential in jewellery (which until then only deemed worthy diamonds, rubies, amethysts and sapphires), Hans began to sell them strategically to tourists visiting Brazil.

“My father was a pioneer whose obsession for quality and his desire to add value to the stones he sold led him to set up the first gemmological lab in Latin America, which is still the most prestigious lab today,” says Ronaldo Stern. Innovation wasn't just confined to the product, however; it extended into other areas such as customer service, for example, in which processes were created that were quite unusual in Brazil at that time.

The business flourished and, in the late 1940s, H. Stern began its internationalisation with the opening of stores in Argentina and Uruguay, to arrive in more faraway places little over a decade later, such as New York, Tel Aviv, Frankfurt and Lisbon, one of the first destinations in Europe to have an H. Stern sales point. With Hans Stern still part of the company, the second generation of the family took on a more active role from the '90s onwards, with Roberto taking on the role of creative directive, which prompted a conceptual change of direction that would determine the future of the brand. “My father set up the company around his passion for the stones.

The jewellery piece was just the support. When my brother came on as creative director, the focus moved to the design. Each piece can be in any material, like just gold, or gold with diamonds or a coloured gem, but what leads is the theme.” But, at the time, Hans didn't take too kindly to the change: “At first he didn't agree, he didn't believe in it, but we were lucky enough to have a father who let the second generation work on and make those changes during his lifetime.

He would observe and give us advice. At the beginning he was sceptical, but afterwards he was pleased when he saw that it was working.” By the time Hans passed away in 2007, H. Stern had established itself as a recognised global brand, “not only for the quality, others have that, but above all for its creativity, something that sets it apart. We incorporated that approach, combining our father's high German standards with the creativity and colour of the country that embraced him, with the true Brazilian ginga [a slang term meaning swing or groove]”.

With creative collaborations with the biggest names in international fashion, such as Diane von Furstenberg, and advertising campaigns with stars like Diane Krugman and Katie Holmes, H. Stern also promotes names from Brazilian culture with the same conviction, with figures such as architect Oscar Niemeyer, the Campana brothers and the Grupo Corpo dance company in its collections, in a relationship that Ronaldo claims to be a natural one.

“Despite my father's German background, he was German/Brazilian and we were born and raised in Brazil. It is because they are Brazilian, of course, but also because they represent creativity anywhere in the world.” The 70th anniversary, for which Ronaldo reveals there are no big events planned, will be marked by various initiatives that will take place throughout the year. They began at the end of 2014, with the exhibition Brazilian Art through Gold at the Centro Cultural Banco do Brazil, along with the publication of a commemorative book at the start of 2015.

Seventy years down the line, H. Stern remains in the family that founded it, despite the rumours that often pointed to the company being acquired by one of the big international luxury conglomerates.

Being independent, as Ronaldo explains, has natural advantages and setbacks: “It allows us to have a long-term vision and to make quick decisions, but when it comes to closing the deal it does limit us.” Here, not even the slowdown of some economies can put the brakes on the brand's expansion plans in Asia, which Ronaldo considers vital for the future of the brand, which currently has 280 sales points spread across 30 countries.

“In the last two years we've opened three stores in Shanghai and two in South Korea, in Seoul, the last one just a few weeks ago. Seoul is a big destination for the Chinese who visit the city to discover new brands, like they do with Paris and London, and as such it is very important from a strategic point of view. Beijing is in our sights, but we're being patient, only when we can get a good location. In this way we grow slowly but the risk is smaller.”

The other key vector in H. Stern's plans for the future, according to Ronaldo, is to give continuity to its creative policy, its ability to create new pieces and new ways to wear jewellery. “This is something that brought us to where we are and what makes us truly different, whether we're working alone or in collaboration. The collaborations stimulate our designers. I often say that creativity is like a muscle: if you exercise it, it will grow.”

Mosaic and King & Queen are the two new collections from H. Stern. The first drew inspiration from the mosaic panels typical of the Greek and Roman civilisations. The collection comprises two rings and three pairs of earrings, a bracelet and a necklace in two sizes and made from noble 18K gold and cognac diamonds, set in a delicate geometric pattern.

Champagne-coloured 18K gold and diamonds make up the King & Queen ring collection, available in two sizes and in two types: king and queen, with stylised versions of the crown, a symbol of power and legitimacy throughout history.