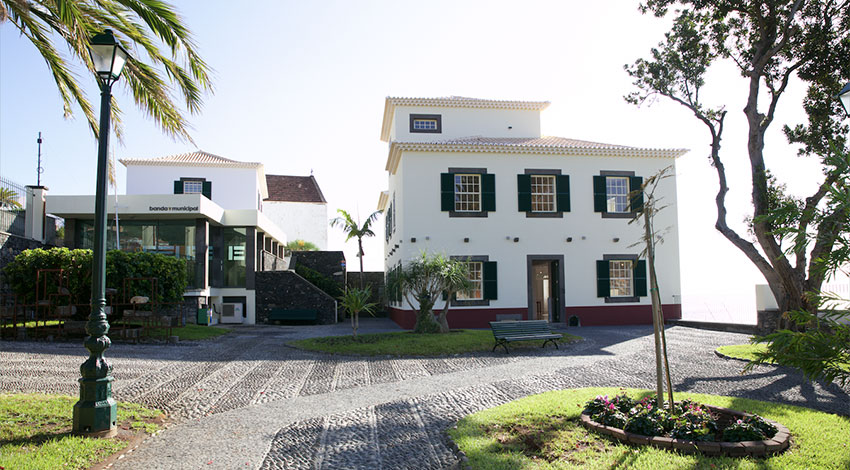 After undergoing renovation works, Casa da Cultura has reopened to the public as the main cultural activities hub of Santa Cruz.

Overlooking the sea, and standing tall atop a bay, Quinta do Revoredo is the main cultural centre of Santa Cruz. The building dates back to the 19th century and now houses the Casa da Cultura (meaning 'Culture House'), where an activities program is developed year-round.

The building underwent renovation works. The facades were kept, as were other original elements including the hung windows and the masonry. But the house has been adapted to the times, for instance, via improved means of accessibility. Several elements were added like the backrests for the garden benches, integrated into the wall that faces the sea and revested in azulejo tiles painted in shades of cobalt blue by artists from Madeira like Helena Sousa, Cristiana Sousa, Patrícias Sumares and Trindade Vieira, as well as Alexandra Carvalho, Sílvio Cró or António Rodrigues.

The Quinta do Revoredo estate was originally built as a summer house for the British Blandy family, who traded in Madeira wine. The tie between the space and cultural activity is actually related to the family since it was Charles Frederick Raleigh Blandy, a naval engineer, who chose this estate as his permanent residence. Charles Blandy was held to be a refined painter of watercolours and portrayed many a Madeiran landscape through his brush. Also a photographer, his lens captured landscapes and traditions from late 19th-century Madeira.

This was the first Casa da Cultura to open in Madeira, back on December 6th, 1993. As well as exhibitions, Quinta do Revoredo has housed many musical shows, films and different types of performances, theatre and lectures. This institution also has an educational service which promotes activities together with schools.