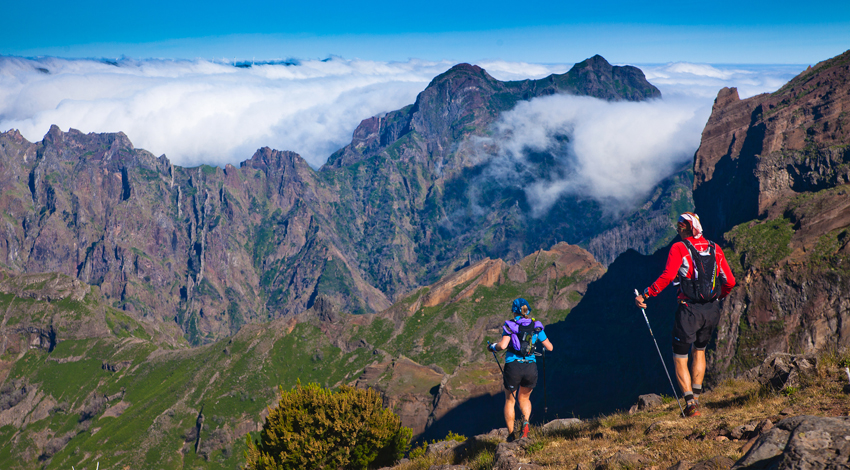 Where sea meets mountain the views ‘take away your breath’ and the setting is idyllic. This is the core of the new Madeira Ocean Trails brand and one of the main traits that make Madeira an ideal destination for this sport. This is what André Gouveia, who is in charge of the project, says.

It is the Madeira Promotion Bureau who is in charge of the new concept of communication the goal of which is to divulge Madeira as a destination with intrinsic qualities perfect for trails. This comes at a time when Active Tourism is more and more relevant in the wider international scene.

‘Communicating Madeira as a rejuvenated destination, directed towards active tourism and capable of attracting tourist fluxes in any time of the year’ is another of the defined goals, says André Gouveia.

The Madeira Island Ultra Trail, Portugal’s biggest Trail Running competition is one of the brand’s partnerships and Luís Fernandes, the first Madeiran to win it, back in 2015, is the official counsellor.

In its first year, Madeira Ocean Trails’ promotion activities will centre on the brand itself and the three major events it integrates: the Madeira Island Ultra Trail (MIUT), the Ultra Skymarathon (USM) and the ECO Trail. All three take place in Madeira and are internationally recognized competitions.

Trail competitions in Madeira are sought all around the world. To take the Ultra Sky Marathon as an example, João Nunes, one of the organisers, counts participants belonging to 13 different countries.

And the sport has a visible impact in the region’s tourism and on the promotion of its natural heritage. Regarding this topic, Patrício Fernandes, one of the ECO Trail’s organisers, notes the strong presence of athletes in social media which serves to help promote Madeira.

Humberto Freitas, one of the organisers of MIUT, maintains that it is the sheer diversity of trails, from the faster to the more technical ones, which makes Madeira island an adequate destination for practising the sport: ‘The famous steps and severely steep, seemingly endless, paths going both up and down’. The main draw is the exuberance of the trails themselves which ‘start in the sea and end high atop the mountains’.