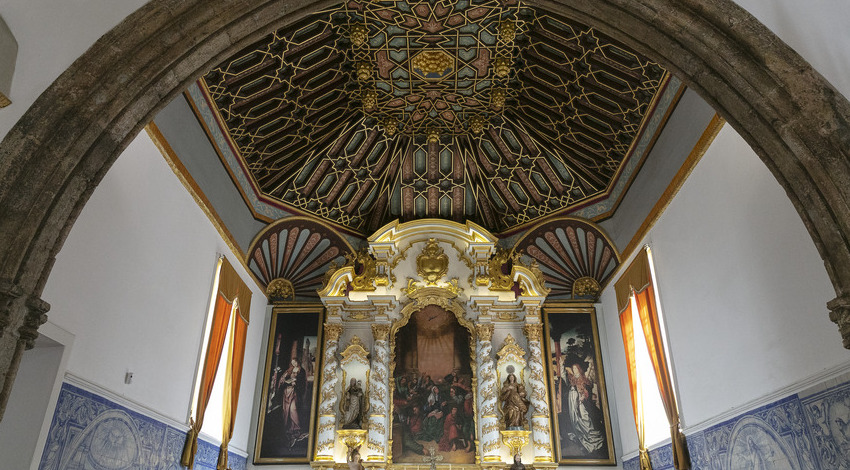 The Mother Church of the Holy Spirit stands out for its Manueline and mannerist architecture and for the main chapel and its beautiful mudejar style ceilings.

Located in the town of Calheta, the Mother Church of the Holy Spirit houses one of the first parishes established on the island of Madeira. The locale was one of the first settlements on the island during the 15th century and quickly became important due to the culture of sugar, which bore many proceeds and dictated the quick elevation of Calheta to the status of town in 1502, a mere 72 years after its establishment.

The church exemplifies religious architecture, for instance, in the ceilings of the main chapel, decorated in the mudejar style.

Its construction will have begun in the late 15th century-early 16th century. This is impossible to pinpoint with accuracy. The initial architecture was gothic, the Portuguese gothic or so-called Manueline style. During the mannerist period, the longitudinal plan was adapted to comprise three naves. This would be the intervention referred to in the doorway, into which the date of 1639 is carved.

The standout in the main façade is the Manueline portal, in the shape of a three-pointed arch over the pillars with spires decorated with maritime motifs, flanking the entrance to a temple with a longitudinal plan composed of three naves where the highlights are the ceilings in the mudejar style of the central nave and the main chapel.

The building is eccentric in relation to the town centre. The churchyard is paved with the traditional Madeiran round pebble stones.

Inside, highlights further include the row of gilded chairs with high backrest, set up at around the middle of the height of the side wall, and the marble pulpit, where the aforementioned inscription of 1639 can be seen.

It is, however, in the main chapel, more specifically, in its ceiling, that one can observe a beautiful main altarpiece in gilded wood and sidewalls with azulejo tyles depicting scenes from the life of Christ.

When visiting the church, one might as well make the most of one's trip and visit the nearby Engenho da Calheta, where, to this day, sugarcane is still processed by vapor and transformed into Madeira's famous rum and sugarcane syrup.