Versatile and ancient, the chestnut is among the most appreciated products in gastronomy 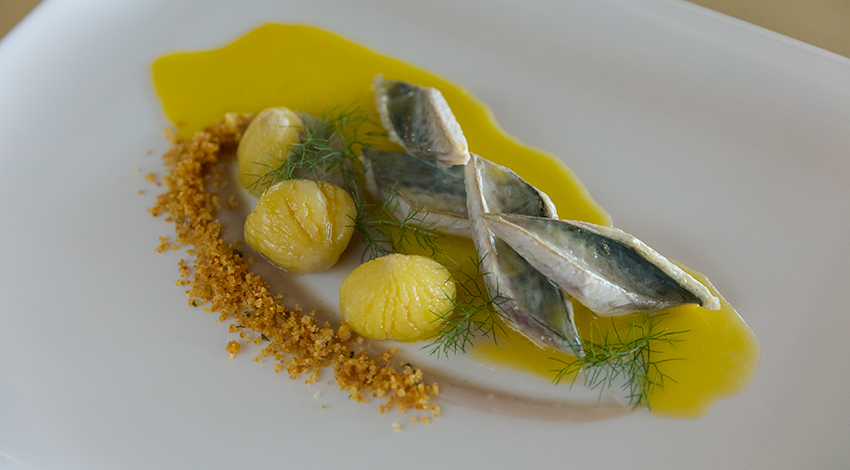 Curral das Freiras is one of the few places on Madeira Island that can be said to be truly interior. It was built at the foot of a volcanic crater. There, man learned to master the land and derive sustenance from the slopes. Chestnut trees feature among the plantations spread around steep slopes and from them come the chestnuts of Madeira, a product founded on fame and tradition.

Chestnuts are among the oldest products used in gastronomy in Portugal. The chestnut precedes the potato and was used as flour in the making of sweets, savouries and even bread. Instead of withering away, the product has grown more and more important with time.

It is widely used in traditional recipes and is also a source of inspiration for chefs featuring among the ingredients of many a good restaurant. In the opinion of Yves Gautier, Chef at the Quinta da Serra Hotel, the chestnut ‘is a versatile product’ because it can be combined with different dishes’, so that the flavours bind in a cohesive manner. In his cuisine, he employs chestnuts in several soup recipes, main courses and desserts. And Yves Gautier lauds the chestnut of Madeira for its freshness.

Octávio Freitas, Executive Chef at the Four Views Hotels, is of a similar opinion and exemplifies just how versatile chestnuts can be: in baking, ‘you can dry and dehydrate chestnuts, reduce the flour and then apply to different types of bread’. In pastry, it can be used in products like cookies, pancakes, crepes, cakes, croissants. Octávio Freitas explains that ‘it is possible to add chestnut flour as if it were any kind of flour’ in any recipe. ‘Chestnut has the particularity of being a very traditional product but equally being very versatile for high quality cuisine’.

Recipes abound and Octávio Freitas give some examples: chestnut crème with mushrooms and truffle oil; sautéed chestnuts with salt or olive garnished with herbs; served with fish, meat, couscous, kale, among many other combinations.

It is thanks to chestnuts that Octávio Freitas took first place in the ‘Madeira Wine with entrees’ competition in 2012, with a chestnut puree with tuna steaks seasoned with lemon.

Tradition can still be experienced in many places like Curral das Freiras where more traditional soups, involving chestnuts, are still served. You can also eat this fruit simply cooked or even roasted in some street vendors around town.

As for desserts, Octávio Freitas gives the example of some of his own recipes like ‘chocolate mousse, half chocolate, half chestnut puree; crepes filled with chestnut mousse; caramelized chestnuts with Madeira wine and honey’.

The chef explains that in Madeira there are ‘seven different kinds of chestnut’. Production remains important in places like Curral das Freiras and represents a great source of sustainability for families according to Dina Silva, a social care worker in Curral das Freiras.

Adding to this place’s famed celebration, the Chestnut Festival, products produced with chestnuts are commercialized all year long. One can easily find cakes, liqueurs and candy made with chestnut for sale in local restaurants and cafes. Dina Silva highlights ‘the famous Chestnut Bread Cookie and Chestnut Cake which are the delicacies most characteristic of this parish’.

Dina Silva explains how the harvest is passed on from generation to generation, a task that happens annually in late October. Chestnuts are harvested by shaking tree branches until the husks fall on the ground. These are opened and the chestnuts are removed and then left to dry.

The tradition behind this product led to the Chestnut Festival, which takes place every year on November 1st, since 1983, in Curral das Freiras. It is organized by a local institution and seeks to promote the product, bringing in people from all over the island. There are stalls selling chestnuts and derivate products right at the centre of the parish. Celebrations include a parade and a culinary contest between the restaurants of the parish.
newsletter